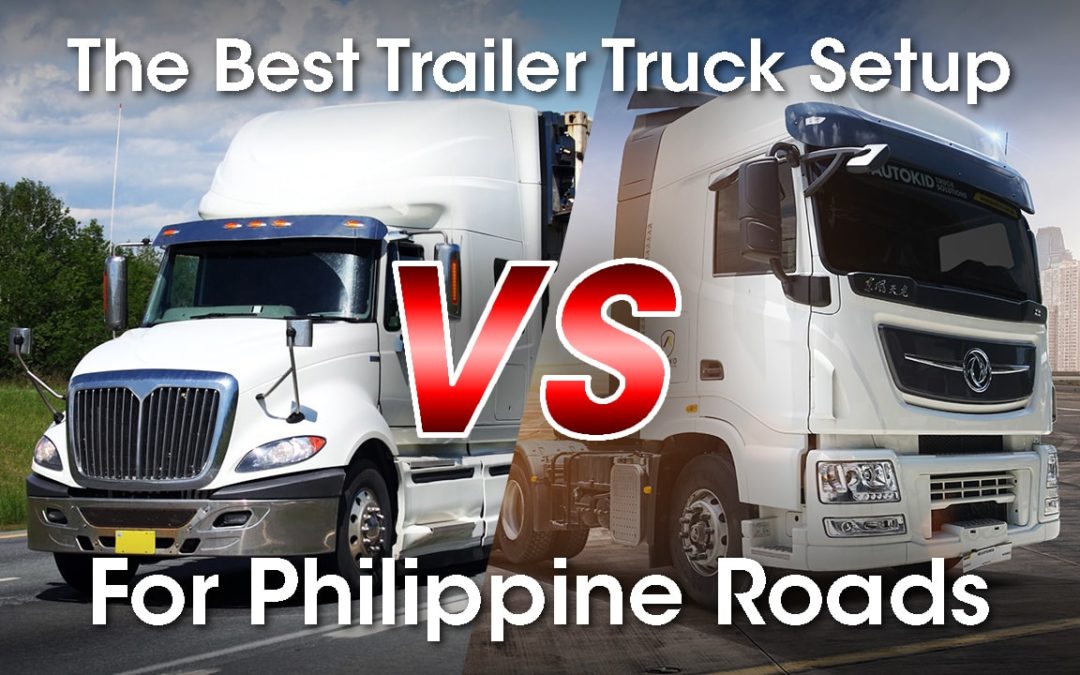 Picture what kind of trailer truck is Optimus Prime from the sci-fi franchise Transformers. You are probably thinking about a Peterbilt unit with a long ‘snout’, something you see in American movies.

You do not see much of these long-snout trailer truck units in the Philippines though, and there is a reason why. Firstly, we have to define the two types of tractor trailer setup.

When it comes to design, trailer truck units can be distinguished between two types: cab-over-engine (COE) and cab-behind-engine (CBE). The former is more common in the Philippines while the latter is something Filipinos might have seen in American movies as they are common in the United States.

In this design, the engine is located below the cabin of the trailer truck, giving it a flat-face look. There are pros and cons to this design as presented below:

In this tractor trailer design, the engine is located in front of the cabin of the trailer truck, giving it a long ‘snout’. Here are the pros and cons of the CBE design in trucks:

Why American trailer trucks are CBE?

Since 1935, trailer truck designs in the United States are heavily regulated by the Motor Carrier Act, which limited trailer truck length to 65 feet. A CBE design would sacrifice the amount of cargo that a truck carries as some of the space is being taken up by the snout. So, COE trucks were preferred over CBE ones back then.

However, as trailer truck length regulations relaxed and the limit was extended to 75 feet, COE trucks fell out of favor. Nowadays, you will not see many of these trucks in the US. This design is now only common in Europe and Asia, where roads are tighter.

The large width of American roads also allowed the widespread use of CBE trailer truck units. Thus, it became the preferred and most common truck design in the United States.

FUN FACT: The original Optimus Prime was a COE trailer truck, but the live-action Transformers franchise made him a CBE Peterbilt unit.

Given the tighter width of Philippine roads, driving a CBE trailer truck in the country will not be easy. It is possible to drive a long-snout truck on the country’s spacious highways, but service roads would be inaccessible to it. A COE trailer truck is more manageable on tight roads and thus more appropriate for Philippine streets.

Moreover, COE trucks are widely available in the Philippine market as it is dominated by Japanese and Chinese brands which are known to only manufacture units with such design. CBE trailer truck units are almost non-existent on the country’s roads.

Autokid Truck Solutions offers quality cab-over-engine trucks which are specially reconfigured for the country’s roads. Every brand new truck you acquire from us comes with parts and aftersales support services. Give us a call at +639176530000.