How to Take Care of Your Engine’s Performance There’s an abundance of available truck parts in the Philippines, making it easy for drivers to buy replacement parts to keep their vehicles running. Amidst these mountains of replacements, however, one truck part that is rarely seen in the pile is the engine. Although possible, many find it impractical to do engine replacements because it often costs as much as, if not more, than a brand-new vehicle. They’d rather dispose of their current one and find a new truck for sale in the Philippines — an option that isn’t ideal for many, especially those in the trucking business.

The engine is the heart of every automobile. They are responsible for powering the vehicle, allowing it to properly and safely traverse the roads. For this reason, the part alone can be sold for extremely high prices. When you add in labor costs, which also isn’t cheap, then you end up with an understandably expensive replacement job — one that many would rather skip.

Luckily, very few need to worry about his particular problem. Engines are designed to last a long time and would only start having problems at the 150,000-mile mark. If you want to make the most out of your truck’s engine, then we suggest you follow these tips on how to ensure your engine performs at its very best until the very end!

Only Use High-Quality Oil Engine oil is responsible for lubricating the essential parts of your engine, preventing them from overheating and reducing daily wear and tear. It is important that you use high-quality oil that isn’t filled with harmful contaminants if you want to get the job done.

You should also make it a habit to replace the engine oil now and then and not wait for it to be riddled with dirt and dust. On average, engine oil must be changed every 5,000 miles (8,046.72 km), but it may differ depending on the manufacturer. To be sure, consult your vehicle’s manual for the appropriate oil change intervals.

The use of low-quality oil and failure to replace them in the recommended interval can lead to serious and permanent damage that can lower overall performance. As the name would suggest, the engine’s cooling system is responsible for regulating your engine’s temperature. This is done by maintaining internal temperatures and facilitating the transfer of excess heat out of the engine. There are several parts in this system, namely, the radiator, thermostat, water pump, and coolant. All of these must be in good condition for the system to properly perform its intended function.

There are many ways to achieve this such as keeping the coolant level above the minimum to make sure it’s flowing freely inside the cooling chambers and below the maximum to avoid leaks. You should also monitor the coolant’s color and flush out the radiator when the color starts to look very red or orange. It also pays to check the cooling system before departing for a long journey.

The damage that will be done by overheating costs far more to repair than maintaining your cooling system so make sure that you do this when you have the time.

In need of truck parts?

Clean and Change the Filters There are two types of filters that protect your engine from harmful elements: air filters and fuel filters. Both must be cleaned or changed accordingly if you want to maintain engine performance and keep your engine running for a long time.

Air filters are necessary to keep foreign objects such as leaves, dirt, and bugs out of the engine. Due to the accumulation of these elements for a long time, the internals of your engine can get blocked which can negatively impact its performance. It is possible to regain what is lost by cleaning these parts, but excess wear calls for a replacement.

Fuel filters, on the other hand, rid the fuel of any contaminants before it is allowed to reach the engine parts. Their key role is to catch sediment, debris, and any unwanted particles and store them in a canister. Unlike the air filter, fuel filters cannot be cleaned and must be replaced regularly.

Additional tip: if you want to improve the performance of your vehicle, switch to performance air filters. These may cost more, but they offer great improvements that are worth the price! After years of use, it is normal for your fuel tank to accumulate a considerable amount of sediment. These are particles that successfully passed through the filter (unfortunately, this can happen).

Once your tank is emptied, these sediments will settle at the bottom and eventually find their way into the engine and its other parts. They will then cause internal damage that is difficult to detect and even more so to repair.

As a precaution, it is recommended that you keep your fuel tank half-full at all times. By doing this, you keep the sediments at bay and prevent them from moving downwards where they will surely cause costly or irreparable damage.

Watch Out for Signs of Damage Your truck’s engine is going to send out signs whenever it needs a little love and care, and you should do your best to watch out for these. Some examples are poor performance, activated engine light, reduced mileage, unusual noises, and stalling.

Assuming you’ve driven the vehicle for a significant amount of time, you should be able to detect these signs as soon as they pop up. Once you do, make sure to perform the proper steps to bring things back to normal.

Avoid waiting too long before fixing these things because it might be too late to save your engine by then. If you can quickly remedy these problems, then you have a better chance of regaining your engine’s performance! 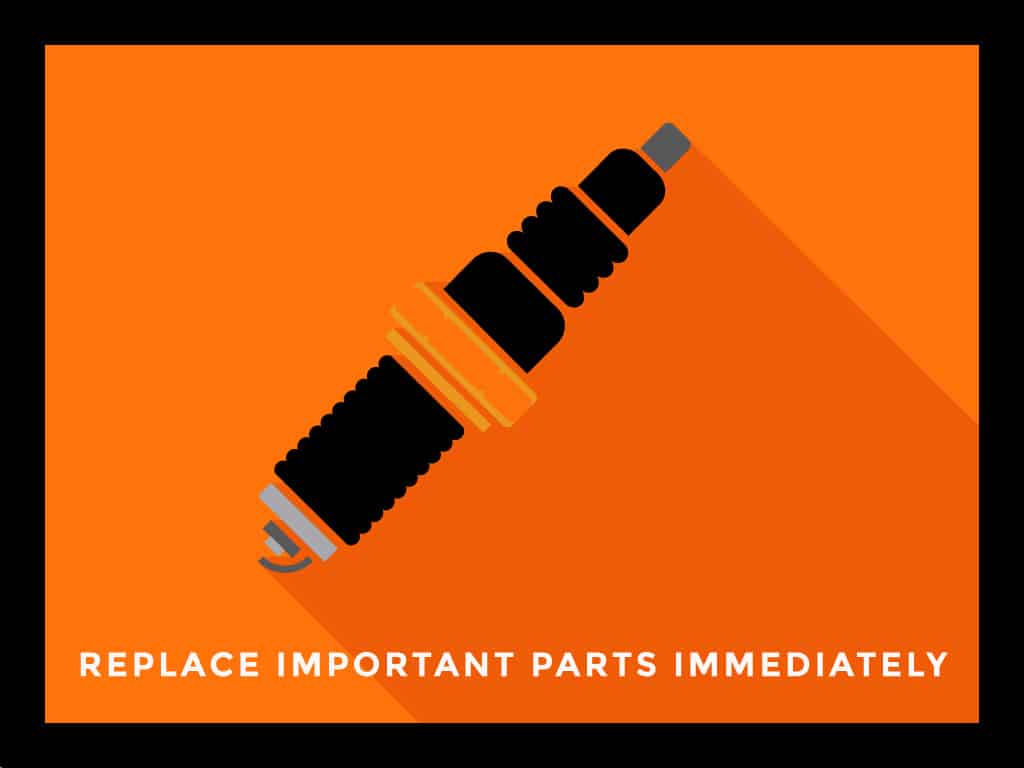 Engine maintenance isn’t purely about the engine; you also have to take other adjacent and important parts into consideration. These are the ones that aid the engine’s function and can significantly affect its performance such as the belts and spark plugs and wires.

The belts are responsible for a lot of things including running the fan, alternator, air conditioner, and water pump. They run whenever your engine is on which means that they get a lot of use. Like any truck part, they eventually wear out. And though these parts typically last long, you need to replace them before they reach their limit. If the belts snap as you’re driving, it can hit the engine and cause major damage, so make sure to keep an eye on it and replace as needed.

Old spark plugs and wires are going to cause your engine to run really rough and undoubtedly affect performance. That’s definitely not something you want to happen. As a solution, change these parts regularly – manufacturers recommend every 30, 000 miles. It’s a simple procedure that you should be able to do as long as you follow instructions so it shouldn’t cost much. The effects, however, are better than you can imagine. Constant stops and starts, which are often unavoidable especially when driving in the city, are really hard on your truck’s engine. As much as possible, drive at consistent speeds and avoid making drastic speed changes in order to allow your engine to deliver optimal performance for a long time.

Driving over hazards such as potholes and unpaved roads are also not ideal as they cause the vehicle and its engine to shake. These intense vibrations can cause damage not only to the engine but to other truck parts as well.

We know how difficult it is to avoid these things, especially when driving in the Philippines since you can’t control the condition of the road or other people’s driving which can make you stop abruptly. However, try to the best of your ability to develop and observe proper driving habits for you and your truck’s sake!

There may be a lot of trucks for sale in the Philippines and more truck parts that you can use for replacements, but they’re all going to cost you a fortune. Instead of banking on these resources, it’s better to maintain your engine and let it live for as long as possible. Doing what we’ve written here should help you achieve that and allow you to get the most out of your investment!

We Drive Your Business