Euro IV: What It Means and Why You Need It What does the Euro IV really mean and why do you need it?

Looking to buy Foton trucks in the Philippines or other kinds of commercial vehicles? Well, if you are, then it’s best that you learn about Euro IV and how it is currently changing the automotive industry in the Philippines. In fact, even if you have no intentions of buying any kind of vehicle right now but do plan to in the future, we suggest you read this article up to the very end.

The “Euro” in Euro IV stands for European Emission Standard, and it is what is used to define the acceptable exhaust emission limits for vehicles sold across the world. These standards were first introduced in 1970, and since then, manufacturers, oil companies, and vehicle owners were ordered to stick to these given set of standards.

What does this all mean for the Philippines, you ask? Well, with a change in bracket also comes a change in rules and regulations that everyone must know if they want to avoid any run-ins with the law. Since there are several different brackets within European emission standards, it only makes sense that we start by explaining each one:

History of the European Emission Standard

As previously said, these set of standards were first introduced in 1970, but it wasn’t until 22 years after that the Euro I was implemented and big changes were made. In 1992, due to the introduction of Euro I, passenger vehicles were required to use unleaded petrol and to be fitted with catalytic converters in order to remove CO emissions.

A couple years after, in 1996, carbon monoxide emissions were further limited and differentiated between petrol and diesel engines through the Euro II standard. It is important to note that this is what the Philippines was complying with prior to the switch to Euro IV. When Euro III was introduced in the year 2000, engine warm-up period was eliminated and nitrogen oxide (NOx) and hydrocarbon (HC) limits were set.

As for the Euro IV, which surfaced in 2005 – 13 years prior to the Philippines’ compliance to it – the focus was on cleaning emissions from diesel cars and reducing particulate matter (PM) and NOx. It even went as far as installing particulate filters in some vehicles. A stricter set of standards was set in 2009 through the Euro V and particle emissions, particle number, and particle weight limits were set.

Finally, in 2014, the latest version of the European emission standards – Euro VI – was established. It was even more stringent than the Euro V and advanced techniques, like the exhaust gas recirculation, were used. Several other car components and materials were also made mandatory such as a NOx absorber (Lean NOx Trap), selective catalytic reduction (SCR), and cerium.

Now that you have an idea of what these Euro brackets are, we can talk about why and how it is affecting the Philippines: 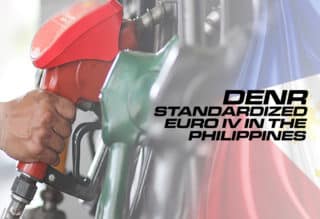 The DENR Standardized Euro IV in the PH

The Philippines actually shifted to the Euro IV emissions standards on January 1, 2016, but the Department of Environment and Natural Resources (DENR) gave respite to those affected. They gave manufacturers and everyone else two years to adjust to the change and phase out Euro II compliant models. Now that we’re in 2018 and DENR’s 2-year extension has expired, every vehicle set to come out the market is supposed to be Euro IV compliant.

Although this means nothing for owners of Euro II vehicles because they can keep driving their vehicles around with no problems, it means a great deal to those who are just about to purchase their own vehicles. Whether it’s going to be used for commercial or personal uses doesn’t matter, if you are to buy an automobile in the year 2018 and beyond, be ready to own a Euro-4 compliant ones as manufacturers and distributors have made the shift to importing or manufacturing Euro IV compliant vehicles.

Most manufacturers and oil companies have already completed the transition and putting out vehicles and gasoline that are sure to pass the mandatory emissions test, so you shouldn’t have a problem getting the right car or truck. You can also look for certificates of conformity (COC) – a little sticker placed on the windshield of a vehicle – to ensure that a vehicle has passed requirements.

The shift to Euro IV from Euro II was done all for the sake of our environment. It’s no secret that we are currently facing an environmental challenge that seems to have us beat. With more and more people buying vehicles that are emitting harmful gases that damage the atmosphere, the health of the environment is at risk every single day.

Although this slight change may not be the one and only solution to our environmental problems, there’s no doubt that it’s a good start. However, little it may seem, the reduction of emissions can actually do a lot for our environment in a way that it slows down its deterioration.

Access to cleaner air doesn’t only benefit the environment but it does everyone living in the country. Most of us spend hours on the road, breathing in and bearing the pollution. We know it’s not good for our health, but we do it because we really have no other choice. So, in order to lessen illnesses and diseases related to air pollution and make life a little better for the citizens, DENR requires everyone to comply with the Euro IV standards.

Adjusting to change is truly hard, but it’s something we must do for our sake and everyone else. So, if you’re planning to buy Foton trucks in the Philippines or any other kind of commercial vehicle, the first thing you should do is make sure that they are Euro IV compliant.

It may not look effective now, but we’ve only just passed the halfway point of 2018. We won’t be feeling the effects of this change in such a short amount of time. Maybe in a couple years or so we’ll finally see how beneficial this shift really is and we’ll be thankful when it happens.